The Establishment And how they get away with it - Owen Jones

Who wields power in politics? To expose the shadowy and unaccountable network of people who dominate British political life—the people who influence major decisions and reap huge profits in the process—Owen Jones sets out on a journey into the very heart of the elite. An invigorating book. He is a fine writer, and this is a truly necessary book.

You will be enlightened and angry. Here, Jones accuses the press of being heavily complicit in creating and crucially protecting neoliberal Establishment interests. Also noteworthy is the chapter on the police.

Current read: The Establishment – And how they get away with it

Jones dwells on the increasingly authoritarian tendencies of the police in the wake of their preferential treatment in terms of pay by the first Thatcher Government. He also reminds us of the national disgrace of the Hillsborough cover-up , and the death of Ian Tomlinson , who died after an unprovoked attack by a Metropolitan Police officer during the G20 protests.

Some of the details are jaw-dropping, and provide a detailed anatomy of police misbehaviour over the last thirty years. 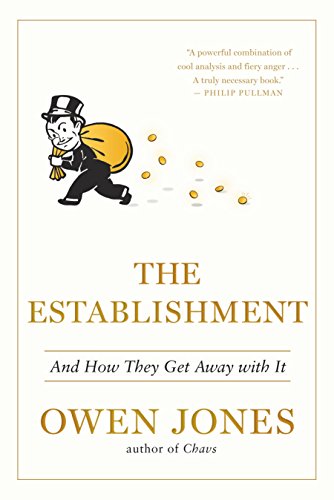 They have been cast aside, with officers joining the ranks of the masses of public sector workers smarting at their treatment by the current Government. The chapter on tax evasion is also noteworthy.


Jones laments the lack of a more robust approach to those who opt not to pay tax, and the devious and deceitful ways the large and embedded accountancy firms interact with the state. Jones moves on to a discussion about the financial sector and its role in creating and sustaining the financial crisis, creating the political space for the austerity that he campaigns against so vigorously on the streets and in print.

To get from here to there, he suggests that the left learn the lessons of the outriders of the mid th Century, working with unions and campaign groups to return credibility to what are currently unfashionable ideas. And while many of the components of his preferred revolution are agreeable, few are novel or unheralded. This is a strong book which will have most readers nodding along in agreement: it is clearly written, compelling in narrative, and even dryly funny at times.

At times, Jones presupposes a degree of shared belief and interest which does not always exist.

While I for one would like to see more about the role of political and constitutional reform in tackling the myriad problems that Jones presents, as with Chavs, he should be warmly congratulated for The Establishment. He has also worked at the Smith Institute think tank, and as an intern for the Co-operative Party.